Oleh GK PDF
Monday, January 20, 2020
Bagikan :
Tweet
SAVE ENVIRONMENT MOVEMENT IN INDIA-Attempts made in India for protection of environment

Since vedic times, India has remained environment-friendly. In vedic time, elements of nature were given the status of deity. Even today the vedic tradition is still practiced and popular in Indian society. In India, environment is maintained by connecting it with religious beliefs. River has been given the status of mother in Indian culture. Trees and plants like Banyan tree, Peaple tree, Ashoka tree, Basil, etc. are believed pure and sacred by offering the status of deity. In this religious beliefs, compassion towards nature and awareness regarding the health of the society is expressed. 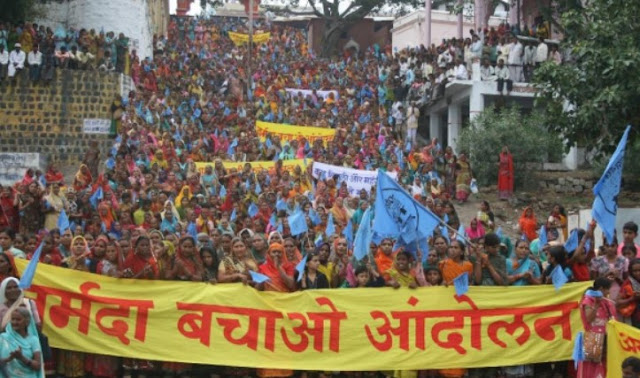 Chipko movement is famous movement for the protection of forests and wildlife. This movement took place in the district of Tehri Garhwal of Uttaranchal State in the year 1970. A decision was taken by the government of India for cutting of trees obstructing for the construction of the new roads in this area. The contractor started cutting trees for the construction of new roads.

Cutting of lush green trees made the local people furious. When the labourers of the contractor went to cut the trees of the interior village Reni of Garhwal, women came out in protest. However, ignoring the protest of women when labourers remained firm to cut the trees, women stuck to the trees by hugging them. Women challenged that before cutting trees, slash them first. Finally, the activity of chopping trees was dropped. By showing courage at the risk of life, women protected the trees. Thereafter, this movement also spread over the entire region and other States. Environmentalist like Sundarlal Bahuguna, Chandi Prasad, Gaura Devi, etc. provided leadership to this movement. Chipko movement has provided an inspiration to the people of India and world to protect environment in the line of non-violence and ‘satyagrah’. Chipko movement became source of inspiration of future environmental movement.

After chipko movement, the awareness for the protection of environment amongst the people through out the Nation increased and movement took place for the saving of environment in other States also, on different issues. In this, save forest movement started in Jharkhand, Bihar in the year 1980, Silent Valley project movement in Kerala in 1973, Navdhanya Movement in the year 1982, Narmada Bachaao movement from the year 1985 are considered chief movements.

Now we will discuss in detail Silent Valley Movement and Narmada Bachaao movement for the protection of environment.

Silent valley is a forest region situated in the Palakkad district of Kerala. Decision was taken by the Government to construct a dam on Kunthipuzha river. The planning was to generate good amount of electricity by Hydro Electric Project to be commenced on the dam. However, due to it, there was a possibility of posing big danger to the forest and environment. The rare mangrooves and the ecology situated in the area of silent valley were in danger. Therefore, construction of the dam was protested and public awareness was spread for the protection of environment by Kerala Shaashtra Sahithya Parishad. This movement started in the year 1973 gained momentum thereafter. Therefore, the ban was imposed on the project by the then Prime Minister. Finally, upon abandonment of the project, the silent valley was declared as national park in the year 1984 for the protection of wildlife and environment.

A project to construct huge dam on Narmada river was started. This project was protested by the environmentalists which was started with the object of generating electricity and making drinking water available to the lacs of people due to Sardar Sarovar Dam. In Narmada Bachao Movement started since1985, local people and non governmental organization also joined. A big question for rehabilitation of displaced people due to Sardar Sarovar Dam arose. Narmada Bachao Movement started keeping issues of rehabilitation of displaced people, damage to the local environment and submerged land, etc. in the centre. However, the question of displaced is solved by the Gujarat Government. And lacs of people have got the drinking water due to Narmada. On getting water of Narmada for irrigation in certain area, dry area became irrigated. Simultaneously the financial position of the farmers has also improved.

At the end, it can be said that problems of environment commence from local level to the global level. Therefore, its solution should also be thought at world level, it should be implemented. Looking from this view, environmental problems are more and more in reference to the world. Any one region or any one nation or a group of Nations cannot bring its solution. For that, Nations should discuss at global level and should attempt to search for its solutions. Thus, it can be understood that environment being a global problem, it can influence the world politics.

In the era of globalization, all the nations after understanding their respective moral responsibility, harmful changes occurring progressively in the environment, which is also called climate change, must oppose it and must attempt to built consensus after discussing and deliberating its short and long term solutions.

climate change is affecting or will affect more or less all the Nations. Therefore, all the Nations are needed to make collective effort to control it. In this reference conferences have been held and will be held at international level. Every Nation should adopt that type of policy in which least alterations are to be made in the climate change. Those factors which are sustaining biology on earth are decreasing fast, any one nation cannot able to bring solution and from that view its effort should be made at the world level.
Tag : ENVIRONMENT MOVEMENT